This will be more of a memento than a regular blog post, I suppose. Last week I got a chance to see the art collection at the Nottingham Castle Museum. It was only a brief visit, yet I made a point of jotting down the titles of all the paintings that caught my fancy for one reason or another. It was more of an instinctive decision than anything. I’d just love to find out more about them. So I’ll jot down what I do know, and also what exactly caught my eye in each painting. I have no idea how this endeavour is supposed to help me in the future. But I always trust my instincts – they haven’t failed me yet. 🙂 Needless to say, please do lend me your expertise if you have more information about these lovely pieces. (Note: most images, unless otherwise stated, were shamelessly stolen from BBC – Your Paintings, which is a nifty little tool in itself.)

The Death of Amy Robsart (1877) by William Frederick Yeames (1835-1918). Yeames himself seems to have been quite a colourful character, born in Russia, educated in Saxony, England and Tuscany. The painting was hung, large as life, on a corridor leading from the main art gallery to the ground floor exhibitions. It attests, I believe, to a mildly (at least?) morbid curiosity on the painter’s part, who was, if we are to believe Wikipedia, “fascinated by the events surrounding the death of Amy Robsart”, sixteenth-century gentlewoman who died under circumstances rendered suspicious by her husband’s unorthodox attachment to Queen Elizabeth I. 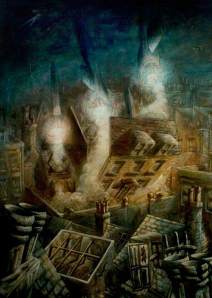 (born 1950). Also hanging large as life on the same corridor as the previous picture. The label read: “Crowley paints the suburb as a nightmare where houses crowd, streets are maze-like and there is a lack of space and order”. I am greatly attracted to conceptual imagery of the suburbs and ghettos. Born and raised in what I think of as a “ghetto”, I have that love-hate kind of relationship with architecturally crowded, ugly yet compelling, generally unsafe sort of places. The painting reminds me of “home”, but also of China Miéville’s novels, a bit. This other painting by Crowley, The Poetic of Space, reminds me of the same.

The Soldier’s Grave (1813) by Sir David Wilkie (1785-1841). “A church interior, with mourners. In the centre of the picture is a large group of figures standing around a coffin covered with a dark cloth”, quoth the BBC website. The painting is so small (19.7 x 16.5 cm), I had to squint, but still couldn’t make out much of what was happening. And yet, the dark colour palette, the barren, Romanesque church interior attracted me very much. I was compelled, I suppose, by how the imposing yet all the same claustrophobic environment reigned over the picture, which made the human figures seem rightly ghostly and amorphous. 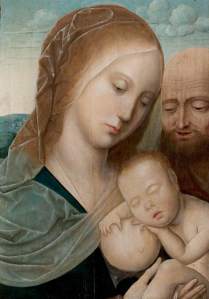 Virgin and Child with St Joseph (1500s) by a follower of Joos van Cleve (ca. 1464-ca.1540). I’m not precisely sure about what attracted me to this painting. It may have been the bland desexualisation of normally sexualised signifiers, such as the naked breast. Or better yet, the figure of St Joseph, looming in the background: it is known that Joseph was older than Mary, and here it seems (to my perverted mind, at least) that the viewer looks upon a libidinous Joseph who, instead of gazing on Child Jesus with tenderness and awe, is actually enjoying the sight of the forbidden fruit of Mary’s uncovered breast. At the same time, Mary looks almost apprehensive, almost painfully aware that she is on display, yet unable to do anything about it. (Just saying.)

Suscipe Me Domine (Receive Me, Oh Lord) (1895) by John Henry Frederick Bacon (1865-1914). By the looks of it, a painting showing a Catholic novice taking her vows to become a nun. The huge canvas (154.9 x 213.4 cm) were hung high in the gallery, and because of the protection screen the view was bad from every angle. I could hardly make out the figures in the lower left corner (the novice’s mother in black? her father right next to her, perhaps bemoaning his daughter’s decision?). It seemed to me an odd painting, though I can’t put my finger on the jarring details. I stood there looking at it for a long time (until one of the gallery stewards saw fit to introduce himself to me and give me a guided tour; he couldn’t tell me anything about this particular painting, though). 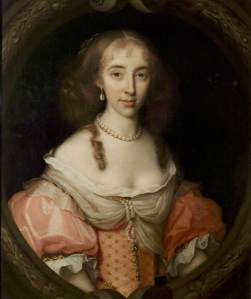 Magdalen Aston, Lady Burdett (1669) by John Michael Wright (1617-1694). Once more, I don’t know. I just thought her beautiful, that’s all. I suppose that’s as good a reason as any… For the history buffs out there, The Peerage makes her out to be

So much for seventeenth-century Who’s Who…

f Paul Sandby by Sir William Beechey (1753-1839). Is this child dead or alive? Is she dreaming dreams of innocence, or are those angels descended from Heaven to claim her soul? As a side note, Paul Sandby was a successful landscape painter. The gallery also held a few more interesting paintings by Beechey, all of them featuring children. For instance: The Children of Paul Sandby and Portrait of a Young Girl. I found them all alluring and a bit… otherworldly. 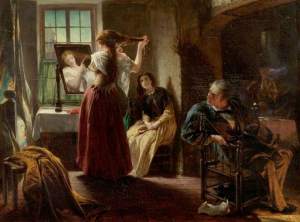 Susannah and the Elders, attributed to Artemisia Gentileschi (1593-1651/3). I wonder whether this was indeed done by her or not. She used to haunt my fancy with her almost mythical “prey turned predator” presence. Her famous Susannah and the Elders (which, I should hope, is indeed hers) seems so different, in so many ways, to the one exhibited in Nottingham. The composition, however, is very similar. I would be really curious to find out how and when this particular painting made its way into the Nottingham collection…

Love’s Oracle (ca. 1900) by Albert Ritzberger (1853-1915). I suppose the lighthearted atmosphere, the girlish dabbling with tarots and the soft reddish, intimate light triggered my nostalgia. It made me feel how good period movies make me feel: far away, comfortably numb and warm inside. I am mildly intrigued by the fact that the only face hidden from the viewer is that of the tarot reader herself. She is only the only one décolleté, which means that she is fashionable? well off? coquettish?

Marigolds or The Bower Maiden or Fleur-de-Marie (1874) by Dante Gabriel Rossetti (1828-1882). My love for the Pre-Raphaelites and D.G. Rossetti is a secret to no one and stems from too many reasons to be listed here. As to this painting, according to the Rossetti Archive:

In a letter to his mother (February 23, 1874) DGR identified the model as “Little Annie”, a young lady later described by Theodore Watts-Dunton as a house assistant at Kelmscott.

And yet, is it wrong that I see in her figure the perfect combination of Elizabeth Siddal‘s and Jane Morris‘s features?

The Mummers (1951) by Richard Eurich (1903-1992). This tiny painting (21 x 15.9 cm) caught my eye instantly. I took a long time to examine the exquisite miniature characters and try to make out the relationships between them. I love them all, each and every tiny figure (bust most of all, the minuscule black cat). I’ve looked at some more of his paintings, and some appeal to me and some don’t. But none other that I’ve seen display quite the same fairy-tale or cartoonish charm that this one does.

Don Quixote in His Study (ca. 1825/6) by Richard Parkes Bonington (1802-1828). Seems that Bonington died the year Rossetti was born, which is quite interesting, in a random sort of way. This puts me in mind of all the seventeenth-century (1, 2) paintings of alchemists hard at work in their ateliers, and indeed Don Quixote and the alchemist are part of the same iconographic context in many ways. Perhaps one day I will write an article on the ways in which the two images interact. 🙂

The Flowers of Capri (ca. 1887) by Filadelfo Simi (1849-1923). I am afraid to say this in not a painting  I would normally have taken much notice of, since neither the style nor the subject do much for me. It was the gallery steward whom I mentioned earlier that pointed it out to me, and then dutifully transferred his own obsession into my brain. It’s difficult to see in the reproduction, but on the right hand side of the picture, just above the kneeling lady in yellow smiling at the baby, the patch of grass looks a bit wobbly and perhaps the space is slightly too… empty. That is because a seventh figure used to be there, whom the artist then painted over. No one has yet found out why he felt that was necessary, and it’s that mystery that keeps me interested.

For Sale (1857) by James Collinson (1825-1881). Lastly, I was drawn to this eye-popping representation of the Woman and the female body as object on offer. The juxtaposition of the woman and the porcelain doll is rather disturbing, as is the carefully displayed (artificial?) flower the normal beauty of which is diffused in the gaudy shop. There are several other versions of this paintings, of which this replica is particularly apt and perhaps even more depressing than the original, which may be an effect of the colour palette and the rather more pronounced and telling smile of the forefront lady.
Once more, I have no idea what will come out of this amateurish cataloguing of vague likes as a result of a spontaneous “field trip”. Perhaps someone will manage to make its possible uses (other than procrastination, of course) clear to me?