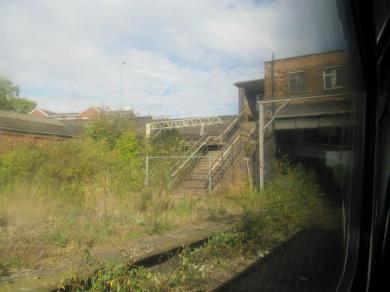 I have had a rather full and stressful day today, I’m afraid, so you must try to understand (and not judge too harshly) if my attempt at poetry for the day has come out slightly…flavourless, in spite of my best efforts. 😦

The NaPoWriMo prompt for today was to write “a poem that tells a lie”, but since I believe it is virtually impossible for poems to lie I couldn’t stick to the challenge this time round. Instead, I have written what is – I believe – a quasi-surrealist piece that talks about wanderlust and probably tells quite a lot about my own mental disorders (which I’m sure abound). 🙂

Have you ever ridden a train?
No, not a dead one whose iron belly
Scratches the earth, mimicking
Speed in its gritty negotiation
Of shifting spaces and barely credible
Change. No, and again no, I don’t
Mean the kind that wails after
Each departing passenger in amnesiac
Monotone. No, I was really asking if
You ever caught a living train,
That quicksilver beast that stops
For no one, that circles galaxies
So fast that swiftness itself becomes
Incongruous, meaningless, obsolete.
Have you ever, yes, have you ever
Captured it with your mind,
Clung to its mane with your teeth,
Felt its hypertensive, buzzing heart
Between your thighs, regardless that
This godless, inhuman being might
Throw you off its back or crush
You against its stellar haunches.
Have you ever seen its vast, immutable
Eye that cares for nothing but
The exhilaration of a chase which
Needs no explanation? Have you
Ever pressed the expectant logic
Of your faint, flickering life
Against its cold, dark scales,
Asking for nothing, receiving less?

And finally, as a bonus for putting up with my nonsense, here’s a photo of Stuart Henson’s poem Faceless, featured in the latest (to date) issue of the TLS: