I haven’t updated this blog in such a long time, but I guess life and work have a habit of getting in the way. Well, this weekend I’ve finally done something properly new that broke the monotony of habit, and now I’m itching to write about it. I went to a taxidermy workshop. That’s right, taxidermy, where you take dead animals and you skin them and cure the hide and then stuff it and pose it to preserve it, hopefully, for future generations. I’m a taphophile (Wikipedia calls it tombstone tourism, but it’s so much more than just walking around cemeteries taking pictures of tombstones, it’s a fascination with memorialisation and the invisible stories of forgotten people); I’m also a Goth, a Victorianist, a collector of ephemera – in short, I’m an enthusiast of all things obscure and a little (or more than just a little) on the macabre side. So of course, when I learned that artist and taxidermist Amanda Sutton of Amanda’s Autopsies was due to hold a taxidermy workshop at Bart’s Pathology Museum at the end of February, I squealed in delight. Attending the workshop would be a doubly awesome experience, since all the proceedings go towards the museum’s rehabilitation, and because Amanda is committed to the ethical sourcing of all specimens. On her website, she states:

Amanda doesn’t use animals that were killed for taxidermy, she uses reptile feed, road kill and animals that died naturally. She creates taxidermy to preserve the beauty of the animal.

Armed with enthusiasm, I essentially begged that someone buy me a ticket. That someone was eventually my partner, who went through three phases prior to buying me this unusual Valentine’s gift:

And so yesterday I went to London to attend the workshop, full of enthusiasm but otherwise having no idea what to expect. I’d also never been to Bart’s Pathology Museum before, so I only had a very vague notion as to how to get there. As a result, I reached St Bartholomew’s Hospital campus (where the museum is situated) about an hour early, and so had to stroll around the area for a while. So I stumbled upon the Church of the Holy Sepulchre, built on the site of an earlier, 12th-century Saxon church, largely destroyed during the Great Fire of London in 1666, and then rebuilt and enlarged, and subject to many changes during the 18th and 19th centuries. Sadly, I couldn’t step inside, since the church was locked and bolted, so all I could do was read the historical plaque and admire it from the outside.

On Giltspur Street I also found a memorial bust of Charles

Lamb with the inscription:

I also stumbled upon the Golden Boy of Pye Corner, a striking gold putto warning passers-by against the sin of gluttony that apparently caused the Great Fire of London. I didn’t have time to snap a photo of him at that point, but you can see photos and read more about the slightly ludicrous figure here.

At Bart’s, I and the other taxidermy-curious were first welcomed by Curator Carla Valentine who made us all fall in love with her a little, I think.(You can read an interview with Carla explaining how to become a mortuary technician – another badass profession – here.) Then we met Amanda and her team and proceeded to learn the basics of skinning and stuffing dead rats for the next five hours.

I had the pleasure of working on a beautiful white female specimen, which made me extra-anxious about the way I handled the scalpel – I didn’t want to cut myself and stain her lovely fur! (I did, as it turns out, still manage to cut myself, and later also stab myself with the needle repeatedly…) The experience, on the whole, was truly enlightening,  not just because I got a chance to refresh some of those notions I allegedly learned in Biology class all those years ago, but because it taught me so much about myself. To begin with, for some reason, I was never quite fully aware that I would have to skin a corpse before stepping into the workshop. My brain had just focused on the process of stuffing, and pushed the skinning into a dark corner. But once I held the body of the rat in my hands and felt its weight, I couldn’t deny it anymore: I was going to have to hold a scalpel in my hands for the first time in my life and split open a body and I was no longer so sure how I felt about that. I panicked a little momentarily: I thought I’d feel very squeamish, faint, and nauseated, and I suddenly didn’t know whether I’d make it through the workshop. When Amanda called us all to demonstrate the skinning process on her specimen, I was truly nervous. However, I was in for a surprise: not only was I not squeamish at all, I actually really enjoyed it! My curiosity and excitement won over everything else: I was very comfortable throughout the five-hour workshop, I was comfortable handling the remains, comfortable handling the hide, and took pleasure in meticulously (albeit clumsily) separating the skin from the body. I’m quite aware this must sound gruesome, but in fact there’s nothing gruesome about it: you learn how to work with the physical remains of a beautiful animal in order to preserve something of its beauty and – if possible – former vitality, and that’s amazing! It’s also something that familiarises you – in a gradual, gentle manner –  with the proximity and idea of death. Maybe it’s the fact that you assume an active role in engaging with a dead body, then priming the skin. Or maybe it’s the fact that you get to imagine a creature’s memorialisation (“should I pose it seated, crouched, or standing? do I want to add accessories?”) and then actually enact it. In any case, in creating a taxidermy project  you don’t just sit apart, looking at death from a distance and trying to make sense of it; rather, you try to work with it so that you can make it part of life. Eerie, but beautiful.

There were other things I learned, beside the fact that I’m not at all naturally squeamish, as I had been inclined to think thus far. I was surprised to notice that:

At the end of the day, I felt incredibly calm and at peace with myself and the world, a lot more so than after meditation class. Doing something like taxidermy, where you have to focus on the immediate work completely, where the mind has no chance to wander and there’s really no time and space for self-doubt, is truly relaxing in a profound kind of way that’s hard to put into words. It’s also empowering and satisfying: when your specimen goes from dead body to empty skin to something that resembles what the animal may have been like when it was still alive (see below), it feels like you’ve achieved something great, and you’ve done it essentially by focusing on your task and doing it well. It feels rewarding. 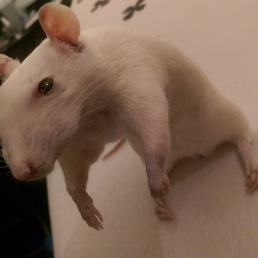 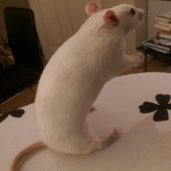 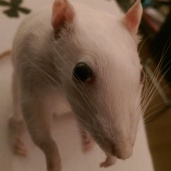 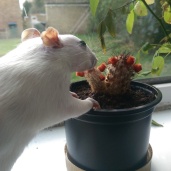 I’d recommend taxidermy workshops to anyone who enjoys a challenge: chances are, they’ll teach you something you didn’t know about yourself and make you feel like you’ve got superpowers at the end of the day. And I’ve found Amanda’s workshop especially enjoyable: she, her team, and the team at Bart’s Pathology made the session comfortable and fun. We worked to a cheerful, delectable playlist – including Imelda May’s incredibly fitting song “Inside Out” – all the time. And during lunch break there was ample occasion for socialisation; I, for one, got schooled by Learning Resources & Facilities Manager Steve Moore about Joseph Merrick, also known as the Elephant Man.

Long story short: I loved it, I would do it again, and you should try it too!