Today I need something a bit more uplifting and inspiring, so as a writer myself, I thought: what better theme for day 7 than “fooling around with words“?

I have to admit, it wasn’t easy finding works from 3 different categories that would fit this theme, since there are many films about writers, but not many about writing, and while there are many games that revolve around words, not all are conducive to writing or telling stories.

But here’s what I’ve come up with.

Book: Margaret Atwood, Negotiating with the Dead/ On Writers and Writing

This book was first published in 2002, under the very fitting title Negotiating with the Dead. However, more recent editions appear under the considerably less striking title On Writers and Writing, “courtesy”, as I understand, of editors who likely know much of business and very little of literature. (A disheartening characteristic of our time, but there we go.) I am happy to report that my own copy bears the original title.

The book is based on a series of lectures on writing that Atwood gave in 2000 at the University of Cambridge, and which describe — with Atwood’s usual dry humour and erudition — the anatomy of the act of writing. What is the relationship between writers past and present, writers and their readers, writers and writing? Atwood answers all of these questions through the lens of her own history and experience, and my oh my, does she deliver!

I first read Negotiating with the Dead in the final year of my undergraduate degree in English and creative writing (of course), and the pit of my stomach still overflows with the excitement of a writing apprentice when I open my copy to find the white spaces on each page filled with my own pencil scribbles, and scraps of paper — also filled with notes — marking the pages that didn’t have enough blank spaces for 22-year-old me to add exclamation marks in.

“To record the world as it is. To set down the past before it is all forgotten. To excavate the past because it has been forgotten. To satisfy my desire for revenge. Because I knew I had to keep writing or else I would die. To produce order out of chaos.”

– Margaret Atwood, Negotiating with the Dead

You can buy the book in e-format for Kindle on Amazon. You can also find plenty of hard copies to order online.

Film: Can you ever forgive me?

This film — released in 2018, from director Marielle Heller — did wonders in terms of keeping my mind from ruminating on my persistent aviophobia on the longest Transatlantic flight I’d ever been on, and that ought to say something.

The film is based on the eponymous memoir of writer Lee Israel (1939-2014), who is now best known not for her original writing, but for the fact that she committed a series of literary forgeries when she had fallen on hard times, and found herself lacking the money to cover even the most basic of necessities.

Can you ever forgive me? tells the story of that period Israel’s life. The film is both incredibly funny and awfully heartbreaking, and forms a very timely reminder that some of the most hyped and glamourised professions in this world are often very precarious, indeed.

You can buy this film on Amazon Prime. 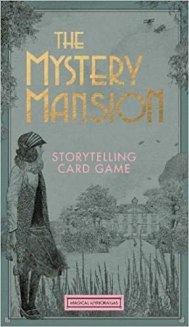 I’m moving away from the virtual with today’s game recommendation, and bringing you a storytelling card game first released in 2017.

The storytelling card game concept is not a new one. The idea is that you have a set of beautifully illustrated cards, all revolving around the same theme, and which the player(s) can arrange and rearrange in a myriad of combinations, to uncover a different story each time. (In fact, the blurb for this card game boasts of “2,432,902,008,176,640,000 storyscaping possibilities.)

These cards are all themed around a murder mystery set vaguely in the 1920s, and artist Lucille Clerc’s illustration style is pleasantly reminiscent of Edward Gorey‘s art.

You can either play a storytelling game with others using these cards, or you can simply use them to tell a story to yourself, which is what I prefer to do.

You can order a copy of this game online (for instance, via Wordery), though there are other similar storytelling card games that you can get, depending on what types of stories you like to hear and tell.

One Reply to “‘Stuck at home’ day 7: Fooling around with words”