Well, this comes right on time for Halloween, I suppose, the best time for reviewing ghost stories. I’ll start by admitting that The Small Hand is the first and only book by Susan Hill that I have ever read. I’ve known about her books for a long time and I’ve been meaning to read what are, perhaps, her best-known novels, I’m the King of the Castle and The Woman in Black. I am still, I admit, waiting excitedly for the screen adaptation of the latter after watching its promising trailer. However, a few months ago I became fairly obsessed with purchasing and reading her most recent novella, The Small Hand. The initial hardback version was, indeed, a jewel of a book: the black and sky-blue arabesque emboss, its pleasingly diminutive format positively crying out “I might be small, but there’s a dark story inside me, bursting from my pages”, its overall “collectors’ edition” aspect. Yes, I will admit I almost comitted the unforgivable sin of judging a book by its cover. However, my ongoing status of penniless student prevented me from laying my hands on this beautiful – but really quite expensive – edition. Instead, I patiently waited until it came out in paperback – by far not as attractive – to finally buy it.

I didn’t get to read it until recently, but when I did start the book, I did so with a lot of enthusiasm. From the first chapter, however, I was sorely disappointed. Whenever I start reading a “ghost story”, whether it be a classic or a modern one, I expect for it to do one main thing: create atmosphere. By “atmosphere” I don’t mean “purple prose”, just a fair amount of description, whether internal or external, that creates a sense of mystery and draws the reader into the story, making it feel as if he/she were living it, as if he/she were the one who met the ghost and had to find out its secret, its motives. In many ways, I believe, ghost stories resemble crime fiction: there should be mystery, some red herrings (but not an exggerated amount of red herrings), and everyone should hold a secret. Well, to cut a long story short, Susan Hill failed to do precisely that: to create an atmosphere. I am aware that a lot of people prefer stories to be told in a straightforward manner, but the way I see it, ghost stories must not be told too straightforwardly, or the mystery, the excitement, the thrills – they are all lost. I read a ghost story for the excitement, the goosebumps – well, with The Small Hand, they didn’t happen. I could have read this book at any time of night and I would have been quite as calm as ever. From chapter one, all Susan Hill does is use a conversational tone, fit for chicklit, but not for horror/ terror. The amount of time that she uses adverbs such as “clearly”, or syntagmas such as “for some reason” shows how she chose the easy way out, instead of using a smart narrative device to pull the reader in and establish a sense of unknown and uncanny. Such easy ways out serve only to make the story plain rather than interesting. 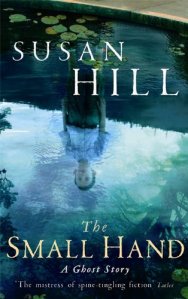 In short, it took me about seven chapters until I became somewhat drawn to the story (and the novella only numbers twenty-two short chapters). To get there, I had to survive cringeworthy dialogue (e.g. when asked why he wanted to revisit the derelict and supposedly haunted villa that is the centre of the story, the main character replies, embarrassingly: ‘Oh – you know how some old places have a strange attractiveness. And I might want to retire to the country some day.’) and paragraphs that contribute to demote the frail sense of atmosphere: He helped himself to more salad. The room had filled. I looked at the walls, which were lined with an extraordinary assortment of pictures, oils and watercolours, five deep in places – none of them was of major importance but every single one had merit and charm. The collection enhanced the pleasant room considerably. (Here, the adverb “consideringly” being another easy way out. At this point, I was shouting at the book ‘how?? how does it “enhance the pleasant room”??? what is “considerably”???’ ) Finally, at the beginning of chapter eight, there was an improvement: the main character’s dream was refrenshingly uncanny and creates some sense of expectancy, of uncertainty. Then, the story goes on, mostly in a predictable manner, until the very end in chapter twenty-two, about which, quite honestly, I have mixed feelings. I am tempted to label it as “good, but not good enough”: it is not as predictable as the rest of the plot, but it falls right flat and leaves the reader with no after-taste. That’s right, nothing.

Again, the plot itself was unoriginal and lacked any kind of depth (be it stylistic, moral, philosophical or psychological), the pace was too fast and, really not much happened in-between the start and the end of the book. Mostly, the plot (and I don’t have any sort of qualms about spoiling it for you – there is not much to spoil) goes like this: man (who is also an antiquarian/book dealer) stumbles upon derelict house and has some sort of encounter with a child’s ghost – ghost starts haunting man – man goes back to the derelict house to face his own fears – man meets queer old lady (who might or might not be a ghost) – man faints and is retrieved by friendly acquaintances – man discovers he is suddenly (!) relieved of the ghost’s presence and is sure the ghost will never haunt him again. That’s it, for the most part. And I will stop here with my review, otherwise I may take this novella paragraph by paragraph and start pointing out all the various little things that made it such a disappointing reading experience. All in all, I must say that, having read The Small Hand, I am unlikely to read anything else by Susan Hill. It was utterly unconvincing. I also feel like it received a lot of undeserved praise based on the author’s former success rather than the actual quality of the book itself.

I would not recommend Susan Hill’s novella to other enthusiasts of the modern gothic and ghost stories: it has very little, if anything at all, to offer. If I were to rate it, I would probably gve it 2/5 points.